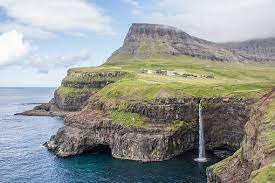 The Faroe Islands located in the North Atlantic between Norway and Iceland. The Faroe Islands is the small country within the kingdom of Denmark with total square area about 1400 square kilometres and estimated population is about 52, 703 as in 2020.

The Faroe Islands have subpolar oceanic climate and little rugged ground and because of the Gulf Stream temperature is always above freezing point through the year due to which the summers temperatures ranges around 12 °C (54 °F) and in winters it ranges around 5 °C (41 °F).

History related to the Faroe Island

Faroe was a part of the Kingdom of Norway from 1035 to 1814 whereas Norway was transferred to the King of Sweden on wining the Napoleonic War and Denmark has retained the Greenland, Iceland along with Faroe Islands.

Geography related to the Faroe Islands

The Faroe Island are consisted of many islands, together 18 major Islands and 779 islands which also includes islets and skerries total are there which comes under the Faroe Islands. The island is about 655 kilometres from the coast of Northern Europe. Click here to know about good and beautiful beaches.

The Faroe Islands covers the area about 1399 square Kilometre, There are small lakes and rivers also but no major river and lakes were there. Coastline of the Faroe Islands is about 694 miles.

These islands have rocky and rugged ground with low peaks, Coastal areas are have cliffs.  Slættaratindur which is the highest point above the sea level is 882 metres . The Faroe Islands are made up of basaltic lava , these lava were erupted by the opening of the North Atlantic Ocean about millions of years.

Most the basic industry of the coastal areas region is fishing and also in the case of the Faroe Island the leading industry is fishing Industry around 80% of the population of the islands are survived on the fishing industry. They export goods which mainly includes fish and fish products. Apart from fishing second largest industry here is the tourism.

The rate of unemployment is very low. The residence here also work in public sector like teachers. The public sectors grow and become popular because slowly slowly fishing industry is becoming less popular and there is no big private sectors so the growth is seen in public sector.

Village and Towns in Faroe Island

People live most of their lives in villages until the 19 century. Their was no such place as town the capital of the island Torshavn also has very little population. As compare today the population level is around 20,000 in Torshavn. When fishing industry diminishes people start choosing farming and chose to live towns or developed places with several facilities.

At present there are many villages in Faroe Island and nearly one is settled near the ocean as the place attract the tourist and people like the place to live near ocean. Most interesting thing was that the houses are painted with black color or in bright colors . Building and houses are very closely built which looks very cosy too.you can see the sheep in the field near the houses and you really feel good.

Tórshavn which is the capital of the Faroe Island. Klaksvík is the industrial city of the island and largest city is Vagur and after Vagur Tvurovri is the second largest city. Fuglafjørður and Runavík were also comes in the list of towns.