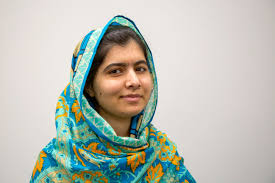 Malala Yousafzai often called as Malala youngest Nobel Prize winner from Pakistan. In 1997 July 12 she was born. She is an activist working for the betterment and upliftment of female. She is known for her fight for girls. She work for the education of women.

She belongs to the Mingora, Pakistan.  Where the Pakistani Talibani took over the village and band many things over there like playing music, watching T.V. and especially stopping girls from taking education and going to school.

She stand for her right and on behalf of many girls and her movement grown big and turn to be an international movement and she become popular in Pakistan.

It is a very old thinking that girls can’t do many things like that of boys, girls birth is not welcoming in most of the place and where Malala born the condition is same. Malala’s father who runs a girls’ school in the village and she loved to study and going to school her father loved her very much and gave every thing she required.  Ashley Johnson

But Taliban took over the her village and everything changed. Talibani’s gave very harsh and tough punishment to didn’t obey their order and according to them girls should not go to school.

At  the very young age of 11 she was forced to sit at home and stopped from going to school. She came into light when she start speaking publicly about the girls education and then she become Taliban’s target.

In the year 2012 when she was returning from school in a bus on October 9, a man wearing a mask entered the bus shot her on the left side of the head. She was badly injured and bleed and became unconscious she was hospitalize in Rawalpindi Institute of Cardiology.

When her conditions was not improving and she need various surgeries and treatment  though her brain did not suffer any  damage, she was transferred  to Queen Elizabeth Hospital in Birmingham, UK.

She was already known to the world and her movement changed into an international movement and people support her and pray for her from all over the world. A German Broadcaster reported that Malala Yousafzai has become the most popular teenager in the world.

After the incident happened in Pakistan Muslim clerics issued fatwa against the organisation who try to kill her. The Talibani was criticized internationally by various groups.

After her recovery in Birmingham,UK she was able to attend school in there. She become very important activist for the right of education for girls. Malala  and Shiza Shahid together founded the Malala Fund  a non profit organisation. Later She visited New York to speak in the United Nation.Later in that year she published her first book named I am Malala, which was an autobiography of her. She was also awarded the Sakharov Prize.

A documentary “He Named Me Malala” was also made and was nominated for Oscar in 2015. She become one of the most influential person world wide and gain large support and love from all around.

Malala completed her High school in 2017 from Edebaston High School in England and completed her graduation from the famous Oxford University in Philosophy, Politics and Economics. She was also awarded with honorary Canadian citizenship and she stood the youngest to address the House of Commons of Canada.

Today Malala is living in England and through her Malala Fund she was able to provide education to girls. She was brave and she fight her battle bravely. Today Malala was an inspiration to the many girls and she continue her battle for girls and for their upliftment.