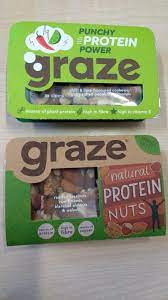 Graze is a company based on serving snack in United Kingdom. The graze company is owned by the Unilever. The company is a big name in serving snack and around 200 snacks they offers through snack subscription box. Every day the company distributes thousands of snacks in UK.

Talking about the history the company was started in 2008 with the collaboration of seven friends where Graham Bosher is the founder of LoveFilm. The snacks include pudding, porridge,nuts and cookies across UK. In 2012 the  company  share was purchased by The Carlyle Group.

In 2013 Graze oped its distribution in New Jersey as beta trails in United States. It expanded its work by late 2013  and set up office in new Jersey city and also in Manhattan, New York.

In 2016 it announces the new launch of a products to retailers in UK which includes the Sainsbury’s ,Boots UK and at WHSmith. In Sunday Times Fast Track 100 Graze was listed as a member and also become the fastest growing company.

An Online store for it also launched in 2016 and food lovers also can purchased food online. The company Graze has a huge success and in 2019 the company was acquired by Unilever. But in 2019 it was notified that their subscription will end in September. It is not taking any orders but fulfills the order pending and they made no announcement to the public and ended their business in US.

What is Graze Box meant for?

Graze Box a dream actually graze box aim to provide happy and healthier meal and also which is convenient  for the customer to buy. The offer weekly ans fortnightly box you can select and order your snack which will be delivered to you in a few days the best snack to enjoy .

Graze Box was started by Graze.com by a small group of people who love to enjoy their snack with friends but there comes a problem when the food or snack is not healthier. All these friend together comes to a point that they will create a service which provide a healthier snack on subscription with the main aim of healthy snack available with convenient.

With convenience you can order your graze box which is weekly or fortnightly box choose your box and your selected order will be delivered in few days. You can very easily close or cancel the order as per your wish.

There are different types of graze box they offer total 20 types of snack box were there. You can choose you box which will be made of any 120 snacks they offer. You can go for lighter as more healthy option which is under 150 calories or low sugar box. The other options also available which is chocolate box or bakery box which cost £3.99 and contains 4 snacks. They provide free delivery charges.